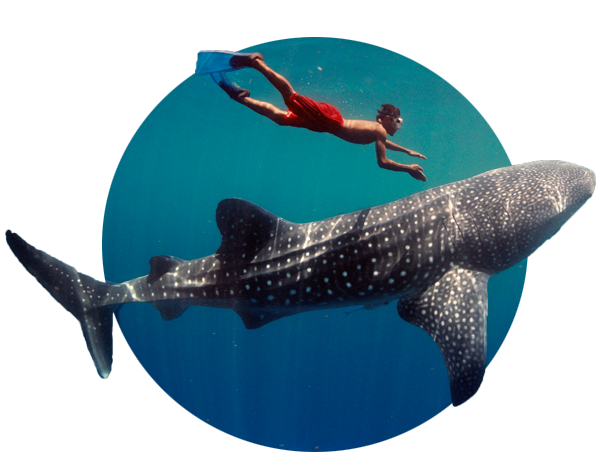 Swimming and Snorkeling with Whale Sharks:

Whale sharks are the largest known fish in the world, they visit the Sea of Cortes during normally predictable seasons, from June to December, they show up in San Luis Gonzaga and Bahía de los Ángeles.

Tourists can Swim and snorkel around them, as long as they comply with applicable regulations imposed by the Mexican Government, to protect them.

Only operators certified and approved by the Federal Government can approach whale sharks, who in turn are obligated to educate tourist on the applicable rules and regulations.

Whale Sharks can be seen in Baja California Eastern coast from June to December. Notwithstanding their size, they are peaceful animals that mean no harm to humans. Because of their size and feeding habits they are commonly known as Whale Sharks (Rhincodon Typus, Smith 1828). Bahía de los Ángeles is one of the few world sites where whale sharks gather. Coast line shape, wind patterns that promote water column mixing and the high productivity of Canal de Ballenas, make Bahía de los Ángeles an attractive habitat, where the specie meets seasonally.

To protect them, the following rules and regulations from the Mexican law apply:

Swimming with whale sharks can only be done while free diving and or with snorkel, it is not permitted to approach the sharks with any type of Scuba Diving gear.

It is worth mentioning that Bahía de los Ángeles is Mexico´s only site where whale shark sighting is done inside a Protected Natural Area and where the largest number of individuals can be found in a single day. 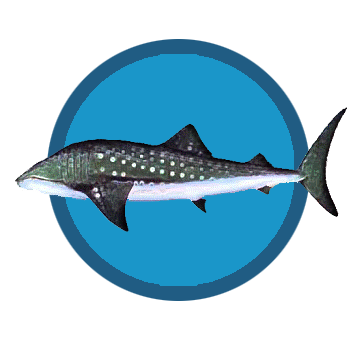 It is suggested that swimming and snorkeling be done only from boats approved by the Ministry of the Environment and Natural Resources and the Port Authority.

Approved boats must display a valid banner issued by the Ministry of Environment and Natural Resources, showing a red banner with an image of a Whale Shark (as shown herein following), reference to the area (State) where the boat is approved to operate and a control number issued the corresponding Port Authority.