Bahía de los Ángeles is a semicircular bay of about four kilometers (2.5 miles) diameter located at 28 ° 55‘ Latitude North and 113 ° 30’ W. Its northwestern side opens to the Sea of Cortés and Canal Ballenas, same that lies between the peninsula and Isla Ángel de la Guarda for about 12 miles, this island and the smaller Smith Island block the bay´s exterior view, and from the coast it appears to be completely closed and without an exit to the sea.

Several hundred yards from the coast, sandy beaches give way to plateau slopes and peeks that border the bay. A water stream enters the bay form the East.

This marine reserve is in one of the world´s highest primary productivity areas, the Sea of Cortés, is one of the world´s interior seas with high productivity, with waters that maintain large populations of fishes, marine turtles and at least 14 types of whales and dolphins, in addition to clams and crustaceans. Its flora and fauna are originally from the Central Tropics and South America, and from the tempered coast of California in the Tropical Indo-Oriental Pacific.

Bahía de los Ángeles was originally a settlement exclusively of fishermen, which has grown to host hotels, restaurants, recreational vehicle parks, markets, etc. and at least one tour operator who serves divers with boats, air fills, guides, spares and consumables. 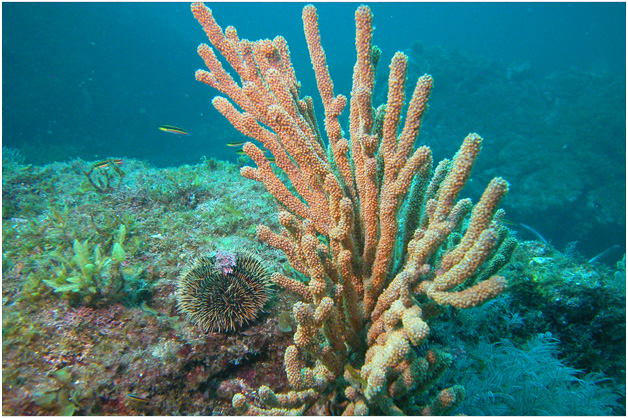 Marine FloraBahía de los Ángeles has a wide variety of marine flora, among them calcareous species (marine sponges) and those endemic species with ecology and physiology for cultivation and exploitation, such as Eucheuma uncinatum and Chondracanthus squarrulosus, stand out.
Peninsular and insular studies in Bahía de Los Ángeles found a large diversity of macro marine algae, 118 species, out of which 9 were registered as endemic to Bahía de los Ángeles. 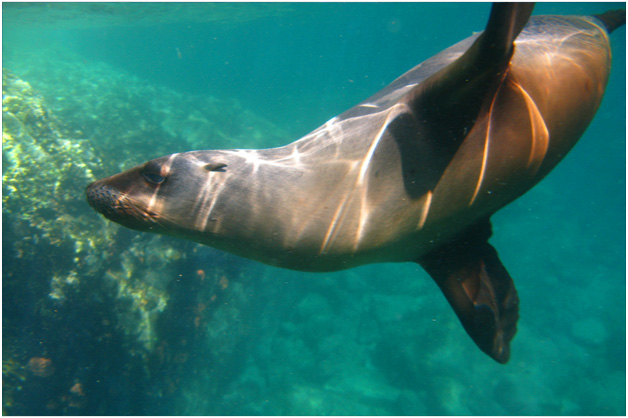 Bahía de los Ángeles hosts a diverse population of marine invertebrates; so far 21 species of sponges have been reported, including three endemic: Micropora coriácea inarmata, Reptadenella, hymanae and Schismopora globosa, 13 hard corals, different mollusks, star fishes and urchins.
Bahía de los Ángeles coastal fish communities belong to the area known as “Upper Gulf”, where several species of elasmobranchs such as sharks, rays, and many fishes live. Additionally it is one of the few world´s sites where large groups of Whale Sharks (Rhincodon Typus) gather, this being the largest fish known.
It is frequent to see Brown (Chelonia mydas), loggerhead (Caretta caretta), ridley (Lepidochelys olivacea), hawksbill (Eretmochelys imbricata) and leatherback turtles (Dermochelys coriácea), the most abundant in coastal waters is the Brown Turtle. There are reports of turtles nesting between the months of August thru November in Bahía San Rafael, El Barril, San José Beach, San Francisquito, San Miguel and Morro Blanco.