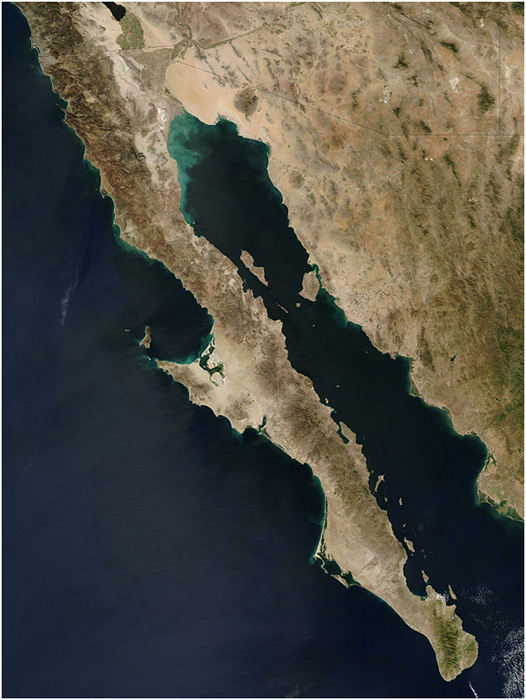 The Gulf of California, also called Sea of Cortes or Vermilion Sea, is an extension of the Pacific Ocean located between the Baja California Peninsula and the state of Sonora and Sinaloa in Northwestern Mexico. It is 1126 Km (705 miles) long and its width varies from 48 (30) and 241 Km (150 miles). The mouth of Colorado River is located at its northernmost tip. The following islands are located within the Gulf, Isla Ángel de la Guarda, Montague, Gore, Consag, El Huerfanito, Miramar, Coloradito, Encantada, Pómez, San Luis, Mejía, Granitos, Navío, Pelícano, Alcatraz, Coronadito, Smith, Pond and the islands and islets located within Bahía de los Ángeles.

The Sea of Cortés is home to 36 species of mammals; 31 cetaceans, five of the world´s seven sea turtles, more than 700 fish species, Sharks included; 210 birds and a somewhat more than 6,000 species lf macro invertebrates, including some of the world´s most beautiful Nudibranchs.

The Sea of Cortés hosts an immense concentration of microorganisms and an extraordinary biological diversity, thanks to abundant sunlight and nutrient rich waters. This components, along with its crystalline water, led Oceanographer Jacques Ives Cousteau to name is:

Sea of Cortés seabed is one of the world´s most abrupt.

Submarine Valleys and Canyons run along both coastlines, creating abysses deeper than 3 Km (1.9 miles). On the average, the sea goes deeper than one kilometer (0.625 miles) and at its deepest reaches up to 3,400 meters (2.2 miles)

The site is of one of imposing beauty, dramatically framed by islands with broken edges and tall cliffs and sandy beaches, contrasting with the desert´s reflections and turquoise water surrounding them. Diverse Shapes and colors complement marine and bird life. Abundance of marine life associated with spectacular submarine views and water transparency make this sites a scuba divers paradise.

The Sea of Cortés is splashed with islands, islets, waterlogged rocks and pinnacles, starting at the Colorado River Mouth all the way to the end of the peninsula.

Many of the islands and islets have been dived, however because of distance and logistical difficulties, those on the northern part are not frequently visited, contrary to those located within the Bahía de los Ángeles archipelago, that are visited by the tour operators operating from the town of Bahía de los Ángeles.

The Shape of the Peninsula, mimicking a long arm joined at the armpit, has been the equivalent of a great net that has caught fish migrations for thousands of years, converting the Sea of Cortés into one of the world´s areas with the highest biomass concentration. 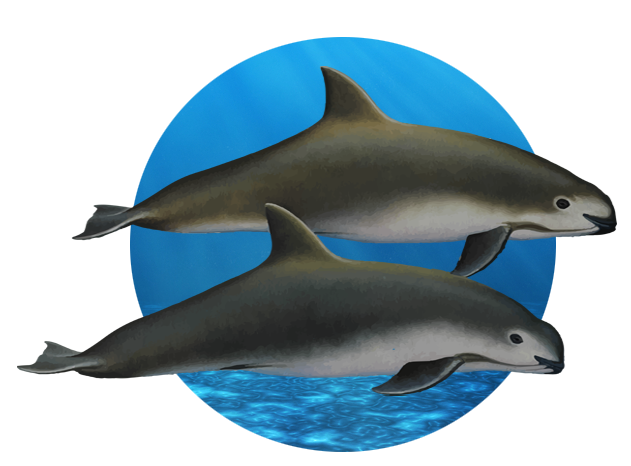 That same effect has produced endemic species as the Vaquita:

Vaquitas travel alone or in small groups, mostly of 2 or 3 animals; studies indicate that their full reproductive cycle takes almost 2 years. In 1993 Mexico´s government established Sea of Cortés´ upper (Northern) part and Colorado River Delta as a Biosphere Reserve to protect Vaquitas, among other species; in 1996 the International Union for Conservation of Nature included Vaquita in their Critically Threatened Species list, because it may become extinct unless preservation efforts are increased significantly.